Food & Autism seem to go hand-in-hand in conversations. However, in reality, they actually kind of suck. Much like kids with allergies, kids with Autism can’t just eat anything or try new things at random. & much like the spectrum that is Autism, it affects different kids in different ways. We’ve been fortunate enough to not have people attempt to offer advice on how to feed our child because DUH but this is more for those that wish to understand why the aversion exists in the first place & how you can be mindful. 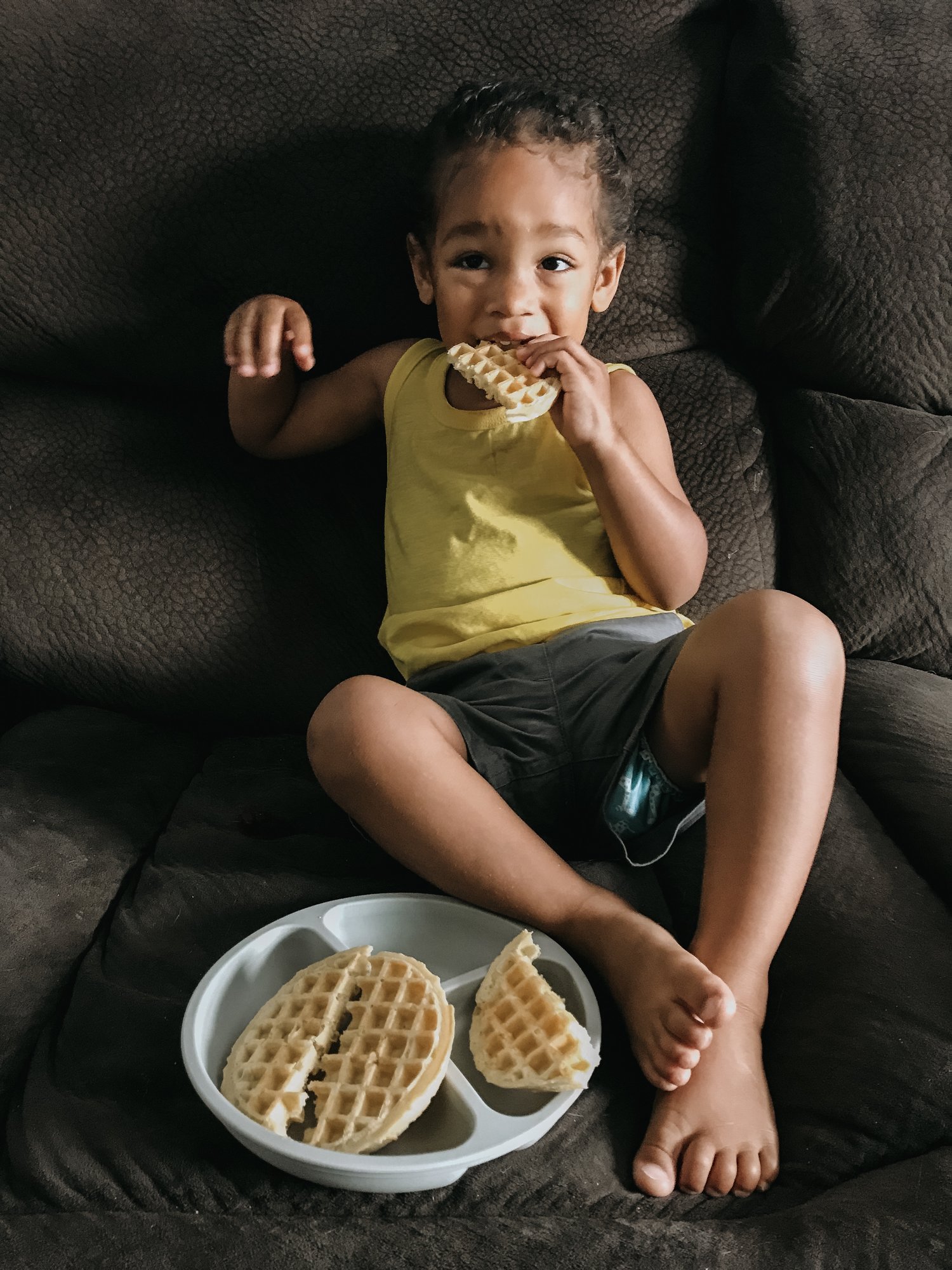 This is Jackson to a T. I joke that we only eat beige things but there’s a lot of truth to it haha. Did you know that colors are a sensory thing as well? Some can be extremely overwhelming & make kids really uncomfortable. Luckily, Jackson’s sensory thing is spacial awareness rather than it being audible or textures but colors seem to be a mild thing for him as well. Foods like waffles, pasta, crackers, mac&cheese & popcorn are his go-to’s. Luckily, most of these foods are solid, basic staples & kids can totally survive on just them. Every now & then he’ll toss it up & attempt a grape but we stick to our old favorites when he needs to eat.

Schedules & routines exist for a reason. People function better when they’ve been established & at some point, become reliant on them. Things that may seem minor to you like using a different utensil, sitting in a different spot, it being a different time of the day, could be triggering for kids with Autism. Not to mention trying a brand new food. Predictability can become a necessary part of daily life for many individuals with Autism. When I take Jackson to daycare, he ALWAYS has 3 containers of crackers or granola bars [beige snacks] & it’s a hit or miss if he eats his lunch. But he will always eat his crackers until he’s full. Every damn time.

Because Jackson is only guaranteed to eat certain foods, he’d obviously be lacking some necessary nutrients. & because the child will always win [don’t tell me he’ll eat it when he’s hungry because he will starve before he eats anything green], we supplement. It took some trail & error through different textures, colors & flavors but we’ve added gummy vitamins to his morning routine before his breakfast. He gets a multivitamin for nutrients, an omega 3 for healthy brain development & a probiotic to make sure he’s pooping regularly.

FOOD AVERSION IS AN EATING DISORDER

We are extremely fortunate that Jackson does eat a good number of things. About 90% of them are beige but he still eats! There are some cases where I’ve heard kids will only eat ONE thing or literally only drinks milk. Food aversions is a disorder & if it’s extreme, it should be treated by a professional, not someone who has a basketball team of kids & “has been there before”. Rather than offering advice, try asking what you can do to help.

Now that I’ve talked about what Food Aversion is for Autism, let’s talk ways to assist. Understand this takes time, probably over a month to really gain some traction but much like all of Jackson’s therapy, it’s all based on repetition & consistency.

As a reminder, every kid or person with ASD is different, as well as their signs. This is supposed to serve as some beginning to understanding the good aversion & being mindful of the differences. I truly hope this helps someone get a better understanding & PLEASE don’t try to offer advice without the recipient asking for it. You don’t know what they’ve tried or if they’re even looking. All kids are different so be mindful of the differences 😊